Santorini Crowned “Most Beautiful Sunset Destination in the World”

Santorini Crowned “Most Beautiful Sunset Destination in the World” 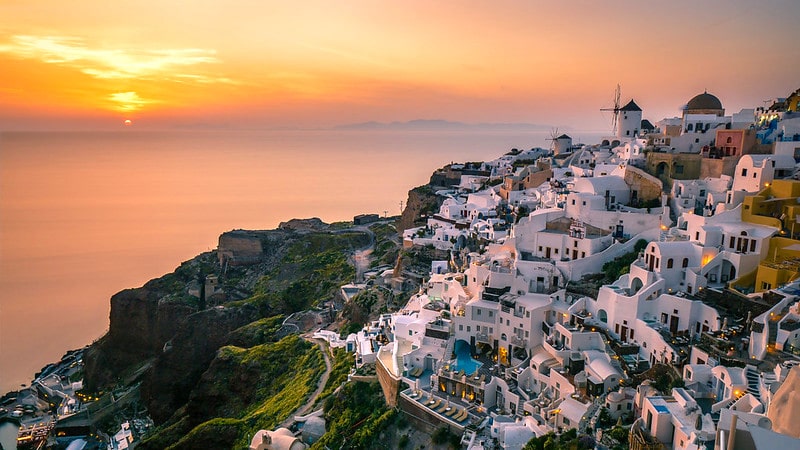 The Greek island of Santorini was crowned recently by the travel website “Bounce” as the destination with the most beautiful sunset in the world.

The website’s travel experts made an extensive study of many international destinations that are famous for their spectacular sunsets, in an attempt to categorize them and create a list based on objective criteria.

How did Santorini get first place?

The study that was conducted by Bounce’s experts looked at the total number of travel articles and blogs which recommend each destination.

Additionally, the number of Instagram posts and the level of pollution caused by artificial light in each area were among the factors looked at in the study.

By quantifying these parameters, they managed to give them a sunset score from 1 to 10, where the higher the number, the better the result for that destination is.

The Greek island of Santorini managed to get a score of 8.29/10, something that made her the queen of all sunset destinations!

”The destination that stood out more than any other was the Greek island of Santorini, which is thought by many to be the most beautiful of the country’s many small islands, known for its towering cliffs and whitewashed houses on the shore of the Aegean Sea,” the Bounce writers noted.

”Santorini was recommended in far more articles than any of the other destinations that we looked at and also doesn’t suffer from light pollution like major cities, with a brightness of 0.627 mcd/m2,” the website stated.

The remaining destinations with top 10 best sunsets in the world

Coming in second to Santorini was the internationally-renowned destination of Bali in Indonesia.

The fourth place was taken by Brazil’s Rio de Janeiro, which was also crowned the most ”Instagrammed sunset in the world.”

From the fifth to the eighth place, we find the following destinations:

The Grand Canyon National Park in the United States with 5.65 points, ranked fifth, the temple area of Angkor Wat in Cambodia with 5.49/10 ranked sixth, Key West in Florida with 5.38 points ranked seventh, and eighth was the Maldives, with a score of 5.27/10.

The Haleakalā, or the East Maui Volcano, in Hawaii, ranked ninth with a score of 5.15, followed by Uluru (formerly Ayers Rock) in Australia with 4.93 points out of ten.

Santorini: Much more than just a sunset

Of course, the Greek island of Santorini is much more than a one-theme destination. Its thousands of years of rich history, along with its unique character, offer so much to her fortunate visitors.

Santorini, or as it is officially known by its ancient name, Thera, was the epicenter of a new documentary airing on the Discovery Channel recently.

The documentary says that the ancient lost city of Atlantis may indeed have been located on what is now known as the Greek island of Santorini.

The new film, part of its series “Blowing Up History,” lends new credence to this old theory.

Recent finds, including those made just this past year, show objects of exquisite artistry found in the area referred to as Akrotiri, on Santorini, which may indeed be the location of the ancient Atlantis.

Protected now by state-of-the-art roofing, researchers continue to unearth more treasures from the past which were buried there, much like at Pompeii many centuries later, preserving a civilization that has been lost forever.

Covered by 200 feet of ash from a volcanic explosion, the almost unimaginable artistic riches, showing extravagant wealth, that have been unearthed recently in Akrotiri have offered up yet more tantalizing clues as to its real identity.

The eruption of the island — which was originally called Stronghili, or “round” — in 1650 BC, decimated all life on the island and erased an entire city-state, which has been shown by archaeologists to have been part of the Minoan civilization.

We use cookies on our website to give you the most relevant experience by remembering your preferences and repeat visits. By clicking “Accept All”, you consent to the use of ALL the cookies. However, you may visit "Cookie Settings" to provide a controlled consent.
Cookie SettingsAccept All
Manage consent

This website uses cookies to improve your experience while you navigate through the website. Out of these, the cookies that are categorized as necessary are stored on your browser as they are essential for the working of basic functionalities of the website. We also use third-party cookies that help us analyze and understand how you use this website. These cookies will be stored in your browser only with your consent. You also have the option to opt-out of these cookies. But opting out of some of these cookies may affect your browsing experience.
Necessary Always Enabled
Necessary cookies are absolutely essential for the website to function properly. These cookies ensure basic functionalities and security features of the website, anonymously.
Functional
Functional cookies help to perform certain functionalities like sharing the content of the website on social media platforms, collect feedbacks, and other third-party features.
Performance
Performance cookies are used to understand and analyze the key performance indexes of the website which helps in delivering a better user experience for the visitors.
Analytics
Analytical cookies are used to understand how visitors interact with the website. These cookies help provide information on metrics the number of visitors, bounce rate, traffic source, etc.
Advertisement
Advertisement cookies are used to provide visitors with relevant ads and marketing campaigns. These cookies track visitors across websites and collect information to provide customized ads.
Others
Other uncategorized cookies are those that are being analyzed and have not been classified into a category as yet.
SAVE & ACCEPT

Send me an email :alicejane@kazron.com